Is Airbit Club A Scam? Cryptocurrency MLM Opportunity Exposed In This Review

Welcome to My AirBit Club Review!

Online business opportunities are everywhere, from those with physical products under different niche to selling membership platforms and now, this so-called cryptocurrency.

Perhaps, that’s one reason why you’re here -- to gain insights and valuable information about Airbit Club, a cryptocurrency business you’re trying to pursue. Well, congratulations on doing the extra mile by researching and investigating.

Quick Summary: AirBit Club is a business opportunity with a cryptocurrency trading scheme. They deal in cryptocurrency and mining to fuel the opportunity and the commissions. Likened to Multi-level marketing (MLM), AirBit Club focuses on recruitment with the promise that you’ll get a higher Return of Investment (ROI) if you invite more people into different levels.

But with various red flags and public warnings raised against AirBit Club in countries where it is already copious (including Spain and Philippines), definitely not a great earning opportunity to join!

Here's My Top Recommendation!
Quick Navigation
AirBit Club Review Summary
What Is Airbit Club About?
Is AirBit Club A Scam?
Price
Pros/Cons
Who Is It For?
Training Tools/Support
Final Opinion/Verdict
What’s Next?

In this Airbit Club review, you’ll find all the answers you need to know whether it’s the right platform for you or not.

If you’re tired of the same old low-quality programs with false promises, I suggest you check my FREE Step-By-Step Guide now.

What Is Airbit Club About?

Though not an MLM company, it follows a multi-level marketing (MLM) compensation structure. The founders were involved in the same business models before founding Airbit Club, so they’re no strangers to operating such kind of platforms.

I did a review on a similar platform before and it’s called BitTrain. You can click this link to learn more.

So what is a cryptocurrency?

As placed in AirBit Club’s company website, they discussed this and how it works in their company. A cryptocurrency is a digital product that fluctuates constantly, very similar to gold and silver. They can be exchanged and operated like any other traditional currency, such as USD, Euro, and CNY Chinese Yuan.

Another feature is that they are outside the traditional centralized system; in which a person or institution has total control over the money. The cryptocurrency uses a completely decentralized, secure and transparent system; that allows each person to fully control their currencies; that means, total control over your own money.

The first cryptocurrency to go on the market as Bitcoin, in 2009, but there is a large number of cryptocurrencies available, all of them with their own features and applications; but those with the highest market capitalization are Bitcoin, Bitcoin Cash, and Ethereum; which are the cryptocurrencies that Airbit Club manages.

As discussed, they also incorporate mining to fuel commissions. So what is mining? It’s not the typical process that miners do to extract coal, gold or other minerals from the earth but here’s how AirBit Club discussed mining in their website. Mining includes three functions: add, secure and verify transactions to the blockchain, and also release new currencies.

The individual blocks added by the miners must contain a proof of work. Mining is a special decoding system that helps miners compete among themselves to solve complicated problems.

The miners solve a block that contains the transaction data, using cryptographic "hash" functions. The hash decoding is a mathematical problem that seeks that the block to be created finds itself with a target space, which defines the mining difficulty, and which depends on the total processing of the network.

The decoding is difficult enough to solve so that each block in an average 10 minutes. The decoding process is what we know today as mining.

AirBit Club doesn’t have any physical product but as to what they claim above cryptocurrency is their digital product that can be exchanged and operated like any other traditional currency.

They don’t have any form of retail products for sale. However, they have tools that will help members trade cryptocurrency in the market. So basically as a member, you will trade various cryptocurrencies such as Bitcoin and trade them in the market. And the market works by buying low and selling high, which allows you to earn profits and commissions.

How To Make Money With AirBit Club? 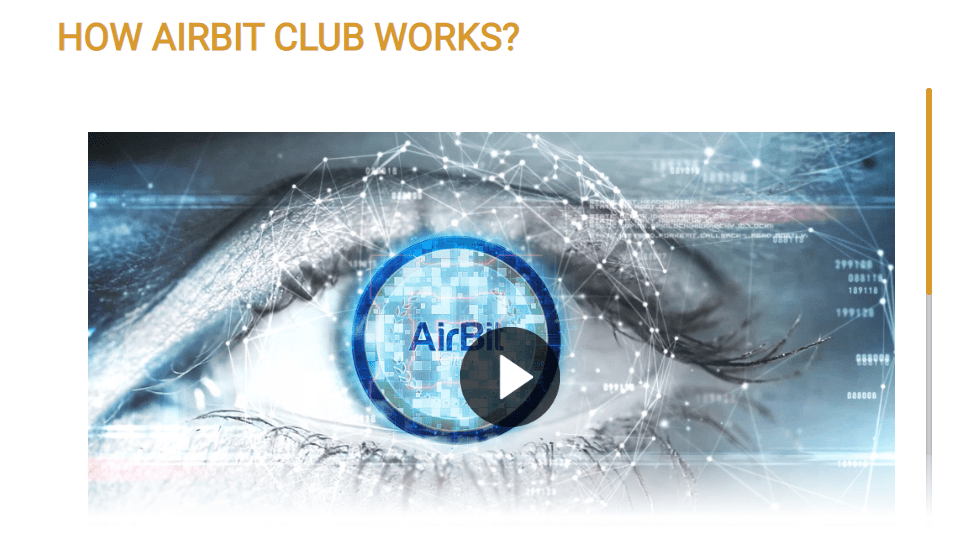 So you start by signing up on their website. As mentioned, AirBit Club doesn’t have physical products or services to offer apart from the income opportunity offered by cryptocurrency and mining. So you will have to trade, by buying their coins and selling it to earn a profit.

The affiliate membership will cost you $50 monthly plus the membership package of choice.

AirBit Club, just like other cryptocurrencies is somehow similar to multi-level marketing (MLM) compensation structure that runs a return of investment (ROI) scheme.

So basically, you’ll earn money through passive income through your own profit by selling these cryptocurrencies and by recruitment commissions. Referral commissions are paid off in a Binary Commissions Structure and a Matrix Commissions Structure. The ROI side of the commission’s plan is when the company’s mining efforts reward you with ROI for leaving your cryptocurrency with them so that the mining software generates a profit for days. The initial membership investments are then broken up to pay 50% to the paying member and 50% to the bitcoin mining.

For the Binary Commissions, here’s how the point system works:

Learn more about their compensation plan in this video:

Is AirBit Club A Scam?

Based on what I’ve found, nothing seems legitimate about AirBit Club. All of the arrows point to it as being a SCAM. And it runs with a Ponzi scheme which is unlawful, even legal authorities have already issued warnings to stay away from these kinds of business schemes.

Having said that, there are already public warnings issued against them in two countries (Spain and the Philippines), for there are even a lot of queries on how they operate. There’s something really fraudulent on how such schemes work.

It’s not even the Better Business Bureau (BBB) accredited.

The affiliate membership in AirBit club will cost you $50 monthly plus the membership package of choice which are the following:

Airbit Club is a Ponzi Scheme which is a fraudulent and unlawful scheme. Unsustainable as it is, AirBit Club was even reported just this year of not already doing payments to its members. I could almost hear the buzz of its closing.

With no physical product or service, it’s as well of a Pyramid Scheme. They have as well more focus on recruitment. Income opportunity is reliant on recruitment, and not sales.

Cryptocurrency Is Not For All!

For someone not consummate in cryptocurrency, things about how this one would run would be hard to understand since it’s complicated for someone who doesn't know. Yes, they will entice you of earning big but chances are not sure!

Don’t opt in to a business just by luck. You should know it well, study and strategize. Because if you are not aware, chances are you’ll just be deceived and be easily fooled.

Novice traders who have no idea of what to do with digital products such as cryptocurrencies may end up losing more money than what they could earn. Imagine, in AirBit Club, you’ll probably be investing up to $7000. And that is such a big amount of money!

Public Warning Issued In 2 countries (the Philippines and Spain)

The Securities and Exchange Commission (SEC), which is the counterpart of the Federal Trade Commission(FTC) in the Philippines, has issued in 2018, a public warning against AirBit Club.

Well, it is intended for those who are consummate and enthusiastic when it comes to cryptocurrency and mining. It could be as well for those who are working from home, probably part-time. But not recommend this to you!

Being part of the affiliate membership in AirBit Club, you’ll have back-office access, including access to your digital wallets (Cash wallet, Commission wallet, and Rewards wallet), your tokens, etc., training and tutorials and other materials and tools you’ll need in the business.

Overall, I could say that AirBit Club is a more likely a scam and I would definitely not recommend you to join this company.

It runs on A Ponzi Scheme which is fraudulent in any way. ROI can be hazy. It would even cost you a lot of money. With no physical products, you are probably just wasting your money for nothing.

Is it not enough to be cautioned by 2 countries issuing such public warnings to this company?! If 2 governing bodies have already found adequate proof to issue that public warning, then it’s best to take that advice and not be deceived!

It feels bad to be deceived, especially if you’ve invested time and money. Therefore, before you sign up for a program, be sure that it’s been tested over time.

With my #1 recommended platform, you know you’re in good hands. Not only do you have all the necessary details you need to know, such as information about the company and the founder, you can also enjoy the following perks:

Thank you for reading my AirBit Club review and if you have any comments or questions, please feel free to share it below.