Is Fx Trading Corp A Scam? No Guarantees In This Arbitrage Trading Investment Scheme Business Opportunity?

There are a lot of money-making opportunities online; sadly, not all are legit. Therefore, before you sign up for a program or start a business, be sure to know as much as possible about it.

Quick Summary: FX Trading corporation or Fx Trading Corp is a multi-level marketing opportunity that is developed by a team that is currently in the Field of FX (Forex Trading) and Cryptocurrency.

Having said that, Fx Trading Corp is an investment scheme that is even coined as a Ponzi Scheme. It may entice you with the idea that you could have a huge return of investment (ROI) after 200 days so that you will opt to buy into their trading bots.

Likened to a Ponzi scheme, the government even issued a warning against them. Definitely, not recommending this one!

Rest assured that I’m not affiliated to any forex trading and cryptocurrency investment scheme, such as this one so I’m giving you nothing but an unbiased FX Trading Corp review.

How does it work? Is FX Trading Cord a scam? How much money can you make from this program?

Find out everything you need to know but first, let’s talk about the basics.

What Is FX Trading Corp About?

FXTrading Corporation is an investment scheme, its platform utilizes an automated arbitrage system that yields profits for customers based on real-time movements in the cryptocurrency market. Having said that, Arbitrage is a form of trading in which a trader seeks to profit from discrepancies in the prices of identical or related financial instruments. These discrepancies occur when an asset (such as EUR/USD) is being differently priced by multiple financial institutions. FXTrading corporation’s proprietary algorithm buys bitcoin and other blockchain assets when they are cheaper, and sells when they are more expensive.

As mentioned above, Fx Trading Corp has an investment program that lets you invest in trading bots. All you need to do is to buy BOTS and then get your ROI based on the investments you’ve made. So what are these FXTrading Corp BOTS?

BOTS are the Exclusive Software with Artificial Intelligence (AI) System created by the FXTrading Corp Trader Specialists for the FxTrading Corporation. This allows all FxTrading users to simultaneously monitor all the best negotiation procedures 24/7 all year round to detect the best values of the world market exchange every second through their back-office.

On their website, they stated that FXTrading Corporation’s headquarters are in Seoul, South Korea but they also have offices in several countries including a corporate store in Dubai.

The company was said to be founded in 2018 by Phillip Han and other traders, although it’s been said that he is only listed as the CEO and not a founder, other third-party reviews who claim to know him personally state otherwise.

Other founders of the company include Young Min Oh (CEO) and Joon Park (CFO). Hanna Kim is also part of the team as the Investing Partner.

As of now that I am making this review, on their website, the company has said to have reached 225 countries with 23 trading professionals and 1,280,500 active investors within their network.

See more of FX Trading in this video:

They don’t have a physical product but what you trade in this kind of business are BOTS, as to what we have discussed above. FX Trading Corp operates on a Multi-level marketing model that relies on arbitrage trading, which they claim promises lucrative to members. But I find that hard to believe, nor is there a legitimate bot that does that as well.

Here are the investment packages that you’ll have to choose from and purchase upon sign up:

How To Make Money With FX Trading Corp?

Signing up is free but to get into the program and maximize earning potential, you have to invest a minimum of $300 and up to $50,000.

So how will you earn in FX Trading Corp?

Likened to a Multi-level marketing platform, FX Trading Corp provides income opportunities by commissions through the return of your investment and mostly through recruitment. 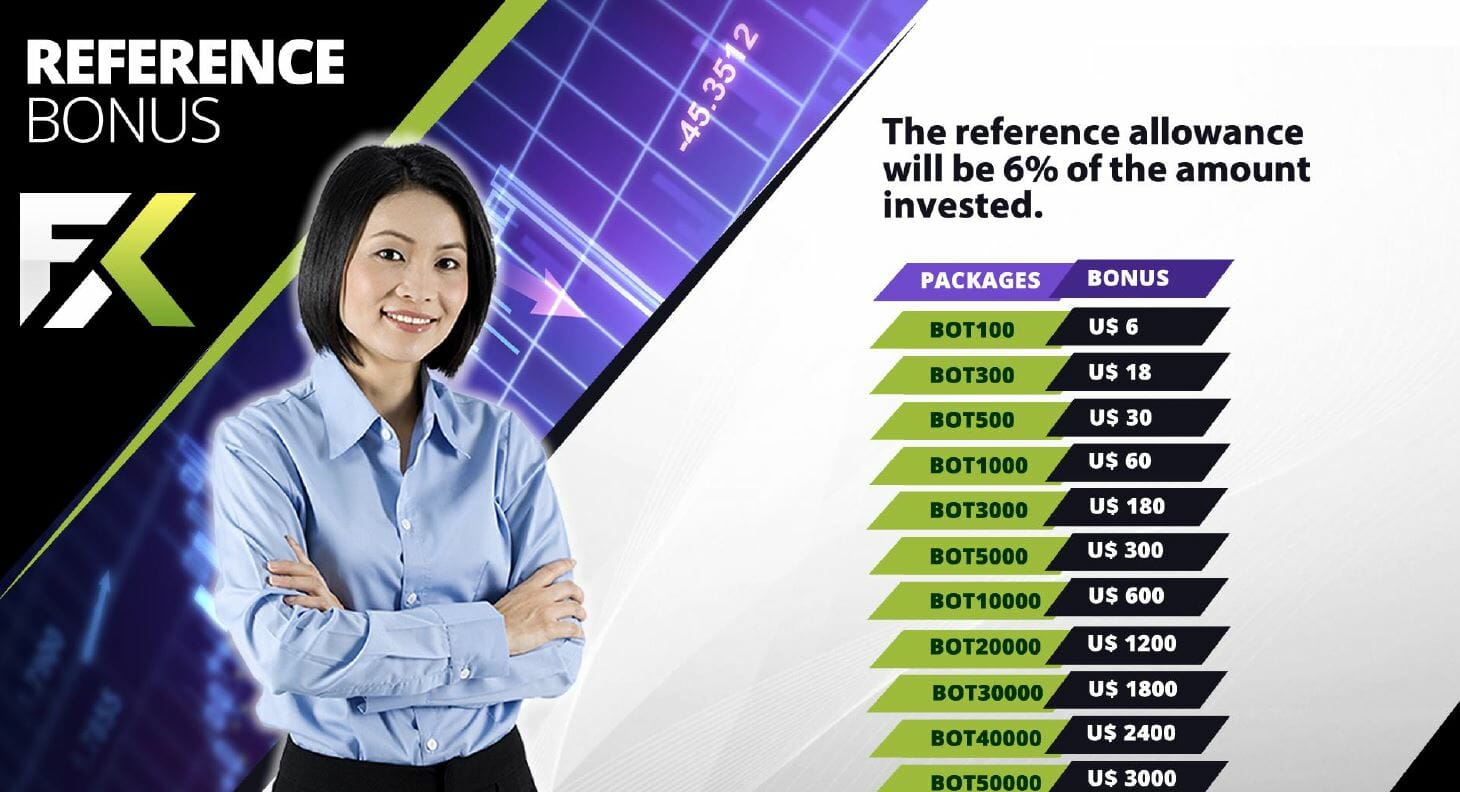 The higher the Star reached, the more chances of having as well the following company bonuses:

See more about their Compensation Plan in this video:

Is FX Trading Corp A Scam?

Well, most probably but we can’t conclude if FX Trading Corp is a SCAM but there’s definitely something fraudulent on how it operates. With no tangible products being sold and with a lot of focus on recruitment, it does contain red flags of being a Ponzi scheme.

The government even issued a warning against them. If the government has already found adequate proof to issue that public warning, then it’s best to heed that advice and not be fooled! They don't even have a Better Bureau Business (BBB) profile and an Income Disclosure Statement that could prove if investors are really earning in their business. Definitely, not recommending this to anyone!

There’s not much to like about what this company offers but the BONUSES it entails as a high achiever member is quite enticing. Bonuses such as a Rolex Watch Reward, International Trip Rewards and a couple of car bonuses including a Toyota Camry, Mercedes Class E, Ferrari, and Lamborghini.

Will Cost You A Lot Of Money

Yes, signing up is made available to all but to gain and maximize earning potential as an active investor, you will have to pay for bot plans/ packages that would cost you from $300 and even up to $50,000. Now, that’s a big amount of money!

Yes, they have been issued by the Spanish Comisión Nacional del Mercado de Valores (CNMV) with a warning. See CNMV’s official warning against the company in the document below.

Yes no refund, your investment is not insured! And just like most investment schemes, there’s no way for you to get your money back once the program closes. Because it is a most likely system and trade-dependent, it would probably close in the long run and if that happens, so does all your money vanishes. Goodbye dollars of investment!

Red Flags Of A Ponzi Scheme

FX Trading Corp is likened to a PONZI Scheme which is fraudulent and unlawful. Unsustainable as it is, possibilities of closing is inevitable. Their founder, Philip Han has even been charged by federal police who say he made a career in suspicious schemes. Indeed, there are no guarantees!

Yes, they are transparent with a lot of things but they don’t have an Income Disclosure Statement. It would be nice if they would provide information with regards to how are company members doing in the business. At least, potential joiners will be aware and informed. So, with no income disclosure statement, how sure are we that ZBlackCard Affiliates are indeed earning?

With overly confident claims talking about how you’ll get a 500% ROI from your investment within 200 days, surely something is deceptive in that! Well, most probably all of the sales pitch they throw at you are no guarantees that you’re making money.

It would be nice and realistic if FX Trading Corp gives facts and results such as an income disclosure statement to prove its claim.

They claim that no experience in trading cryptocurrencies is needed in joining this business but honestly speaking, it would be really hard. For me, it would be really intended for those who are consummate and enthusiastic when it comes to cryptocurrency and arbitrage trading. It is not for all because it would definitely need money for investment. Likened to an MLM scheme, it focuses more on recruitment. So it could be for those who are good at recruitment.

Being an active investor in FX Trading Corp, you’ll have back-office access, including access to your bots in which you could monitor all the negotiation procedures 24/7 to detect the best values of the world market exchange every second. Their website is even transparent when it comes to their compensation plan, tutorials and other materials and tools needed in the FXTrading business.

Overall, I could say that FX Trading Corp is most probably SCAM, I can’t totally conclude but it surely somehow operates deceptively. And yes, I would definitely not recommend you to join this company. It is likened to a Ponzi Scheme which is fraudulent in any way. It would even cost you a lot of money.

With no physical products, you are probably just wasting your money for nothing. Is it not enough to be cautioned by a public warning issued in Spain against this company? If governing bodies as such have already found adequate proof to issue that public warning, then it’s best to take that advice and skip this platform.

Online business opportunities are indeed everywhere but see to it to invest your time, money and effort on earning opportunities that are honorable, trustworthy and safe. Be vigilant and wise!

Making money online is not easy; however, with the right program, you can surely have the financial freedom you’ve been dreaming of.

Sign up with my Highly-Recommended Platform now and enjoy the following benefits:

Thank you for making time to read my FXTrading Corp review. I hope you can check the rest of my reviews to find out which program is best for you or not.

And, if you have any questions or comments, please feel free to share it in the comment box below.