Welcome to My Two Comma Club By ClickFunnels Review!

There are a lot of online communities for online entrepreneurs, mostly for support and resources.

And now, here comes an online community that doesn’t only give the resources, support, coaching, and motivation but also rewards you if you’ve made an income of over 1 million dollars with ClickFunnels, which is their online sales funnel builder.

The question is: would that reward be worth it?

What would you get in return if you paid the application fee for this club and achieved the 7 digit income goal through ClickFunnels?

Is the Two Comma Club a scam or legit?

Let’s know more about this opportunity in this review!

What Is Two Comma Club About?

The Two Comma Club is a rewards club made for any entrepreneur who has used ClickFunnels to grow their business and is earning up to 7 digit income. Thus, the name “two comma”.

So, anyone who is using ClickFunnels and has achieved that income can apply and pay the application fee to become part of the Two Comma Club and get their award delivered in the mail.

The Two Comma Club was created a few years back by Clickfunnels CEO Russell Brunson. 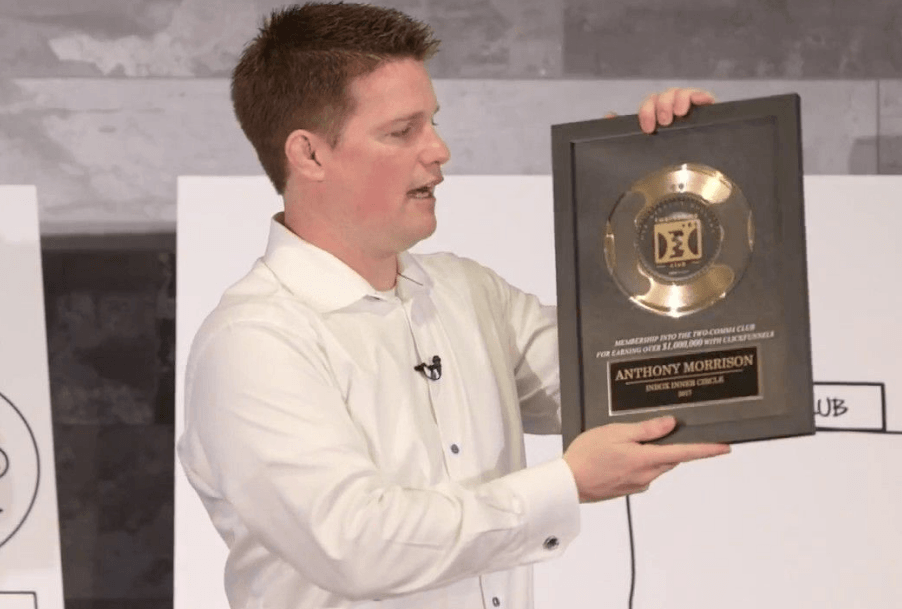 We’ve already talked a lot about Russel Branson from our previous reviews with his best-selling books, such as Dotcom Secrets, One Funnel Away, and Traffic Secrets.

Brunson is a famous marketer and a successful one. He not only spearheads ClickFunnels but he’s also one who co-founded this software. He’s a renowned best-selling author that has sold hundreds of thousands of copies of his books.

As mentioned, ClickFunnels is an online sales funnel builder that helps tens of thousands of entrepreneurs quickly get their message out to the marketplace.

So basically, Two Comma Club is its online community where they reward entrepreneurs with a plaque. Yes, the reward is just a plaque but we’ll talk more about it below.

Apparently, to be eligible to join Two Comma Club, you should generate a two comma (7 digits) income, which is approximately millions of dollars but of course, the catch is you should make that using ClickFunnels. Once achieved, you apply for your chosen award and pay the application fee (which I will be discussing later).

So to summarize the application process, here’s a run-through of the requirement and what you should do:

And by the way here are the Two Comma Club Awards and it comes in a few tiers and it’s based on how much money you can prove that you made with ClickFunnels:

So what do you get if you make millions of dollars through ClickFunnels and join the Two Comma Club?

It’s apparently just a plaque of recognition to hang on your wall and a chance to walk across the stage at Funnel Hacking Live. Yes, it’s just that. Probably, it’s just to have something to brag about and pay an extra $250 or more. Talking about bragging rights.

Well, the plaque is nice if you’re running a consulting business or offering entrepreneurship courses and coaching or if you’d just like to brag to your customers just how successful you are.

Yes, getting a plaque may be heartwarming but getting it and then being asked to share funnel blueprints as a lead magnet for other ClickFunnels prospects - while continuously paying for the tool and paying the application fee for free?

I get the point that it’s one way to motivate others and endorse the platform but you should know that it comes with a price.

Who Is Two Comma Club For?

Two Comma Club is best for internet marketers who are already earning a lot through ClickFunnels (7 digits or more). It would be a great avenue for them if they want to reiterate their accomplishments as an entrepreneur.

It could be a way to market to people to buy your products and pay for your services or go through your courses as well. But hey, a $250 fee is not that much for someone who is already earning millions of dollars, right?

How Much Is Two Comma Club?

Want to know how much the Two Comma Club coaching price is?

First thing first, to be eligible to join in Two Comma Club’s exclusive membership, one should pass the requirements or proof and pay the awards being applied for, and below are these tiers and their corresponding application fee:

It’s nice to have an online community that motivates and inspires you. Two Comma Club can be a platform that drives people to do better. because when people see other people build incredible businesses, that's proof that they can do it, too.

When that proof turns into action, that action turns into results and then you get a ripple effect of success.

And that’s their goal in Two Comma Club -- to inspire ClickFunnels users to do much better. That ripple effect is a big reason why they’ve given out more than 700 Two Comma Club awards to these ClickFunnels entrepreneurs! Well, still a long way to go as there are over 10,000 members.

A Way To Market Business And Platform

As they say, the best marketing testimonial is from a satisfied customer itself.

So as a user of ClickFunnels that have been successful and had claimed a Two Comma Club Rewards, simply shows that the software works. Not only that you promote that program but you could as well endorse your own business if that happens.

Fee For A Reward

It’s great that Two Comma Club acknowledges and rewards entrepreneurs who’ve built amazing businesses and have grown their business and earn millions but apparently, that recognition comes with a fee.

Some might think that it’s a bit absurd to pay for a reward but then again, it offers more, such as resources and coaching.

Well, it’s impractical for some but for some, it can be a sense of fulfillment seeing something tangible that shows their success.

In conclusion, Two Comma Club is a legit online community that is up for acknowledging successful entrepreneurs by giving them awards, such as plaques.

I also like that it’s geared towards motivating and inspiring other ClickFunnels entrepreneurs to do better. Having a community, whether it’s online or not, surely helps encourage a person to push towards their goals.

However, the idea that you have to pay the Club an additional fee to get the reward is quite absurd.

A $250 to $450 fee may not be that much for million-dollar earners but it’s just quite impractical. For me, the revenue itself is already an award. Well, the plaque is only nice if you’re running a consulting business or offering entrepreneurship courses/coaching or if you’d like to show your customers how successful you are.

However, from a business standpoint, the Two Comma Club is a great way to prove that your software works and that it turns people into millionaires.

It provides trust and a sense of establishment to potential marketers as well. So basically, the Two Comma club functions as social proof to attract new customers.

We could say that ClickFunnels can certainly have the capacity to help people earn millions of dollars and Two Comma Club is a great avenue to bask in that achievement.

It may be costly but it’s a ticket to be part of that exclusive membership and award.

So, if I recommend it or not, it depends on what standpoint you are at.

Want to make extra income or another source of cash online?

If yes, then I recommend that you join our #1 recommended program and have access to the following benefits:

Thank you for reading our Two Comma Club review. If you have questions or comments, please feel free to drop them down below.